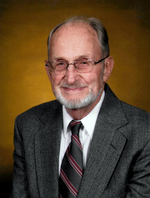 Austin Peay Grogan, 93, of Lewisburg TN, passed away January 24, 2021 at Merihil Nursing Home, Lewisburg. The son of the late William Haskell and Sarah Nancy Jane Dunn Grogan, Mr. Grogan was born April 21, 1927 in Cookeville TN.
The lanky teenager met his lifelong sweetheart at the Eagle Cafe in Cookeville, where she served him lunch each day. Their relationship flourished and, while on leave from the army in 1945, Austin and Emma Ruth Phillips caught a bus and eloped to Rossville GA in a rainstorm, where they were married December 29. She passed away from Covid in November 2020, just shy of their 75th anniversary.
Like most able-bodied young men his age, Mr. Grogan served our country in 1945-46. Stationed in both France & Germany, he drove an Army refrigeration truck delivering supplies up and down the Audubon; a quick study, he picked up some of the German language, which he remembered throughout his life.
After his tour of duty ended in the Army, he returned to Cookeville to take advantage of the G.I. Bill and attended Baxter Seminary where he completed auto body repair and electrician courses.The Grogans made their home in Cookeville and started their family there with son Gary and daughter Brenda. He worked first driving a Pepsi delivery truck and later did a few years at the Pure Oil gas station, before being hired by East Tennessee Natural Gas Company. In 1959, his employer relocated the family to Lewisburg, where they welcomed daughter Kim a couple of years later. Mr. Grogan enjoyed 31 years with East Tennessee Natural Gas, but a Hodgkins’ diagnosis necessitated his retirement in 1982 much earlier than he would have liked.
When it came to hobbies, Mr. Grogan’s always seemed to involve “work,” such as sharpening knives and replacing tool handles for anyone in need, building fish fryers, and welding an assortment of hay haulers, roofing and brick mortar tools. He was also well known as ‘Mr. Fix-it’ for every kid’s bike in the neighborhood.
The Grogans’ plentiful garden – beans and tomatoes – were enjoyed and appreciated by many, especially “The Krystal Breakfast Club,” but his biggest, most prized tomatoes occupied a place of honor in his vehicle so he could drive them around and show them off! Mr. Grogan also loved keeping up with current events and followed CNN and Fox for the latest happenings.
Both long-time members of the Church Street Church of Christ, the Grogans were regular attendees until their health declined. Merihil has been his home for the past year, where he was well cared for by a loving staff.
In addition to being pre-deceased by the love of his life, Ruth, he was also pre-deceased by brothers Haskell Jr., Payton, Donald, and Harold Kenneth, sisters Beatrice Elmore, and Ara Farley; daughter Brenda Smith and grandson Grant.
Survivors include brother Layton (Joy), Gainesboro TN; children Gary (Gloria), Kimberly (Wayne Patton), son-in-law Ed Smith; grandchildren Greg (Natalie), and Ashley Smith Duvall (Jody).
Due to the current pandemic, a private family graveside service will be held Tuesday, January 26, 2021 at Lone Oak Cemetery, Lewisburg TN. London Funeral Home is in charge of the arrangements.