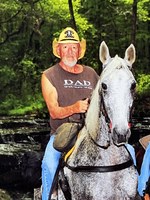 He was born March 2, 1952, in Lewisburg, Tennessee, and was the son of the late Clyde Vernon Ingram, Sr. and Lila Grace McCoy Ingram. He graduated from Marshall County High School. He was a retired engineer, working for several companies including General Electric, Inter-City Products, and Rheem Manufacturing. Most recently, he worked as a school bus driver for Marshall County Schools.
In addition to spending time with his friends and family, Clyde was well-known as a talented musician and enjoyed many years of performing and entertaining others. He also enjoyed horses and spent time trail riding with family and friends.

In addition to his parents, he was preceded in death by his sister, Deborah Fay Wiggins, and a nephew, Ray Liggett.

He is survived by his wife, Debra Archer Ingram, of Lewisburg, daughter, Laura (Brent) Skinner of Eagleville, and son, Clyde (Stephanie) Ingram of Gallatin, TN. Surviving grandchildren include Morgan Ingram of Murfreesboro, Jack and Sam Ingram of Gallatin, and Katie Grace Skinner of Eagleville. In addition, he is survived by his brother, Bill Ingram, of Lewisburg and several nieces and nephews.

In lieu of flowers, donations can be made to Vanderbilt Ingram Cancer Center, 2220 Pierce Avenue, Nashville, TN, 37232.