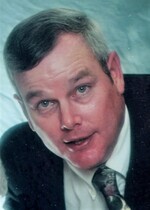 Jim was born in Nashville, Tennessee, the son of Nathaniel Ogilvie Murrey and Alice Wilkes Peebles. As a small child, the family relocated to Lewisburg which Jim called home for most of his life. He graduated from Marshall County High School in 1975 and then from the University of Tennessee, Knoxville, in 1995. Jim had many talents and explored them in many different ways throughout his working career—from a traveling salesman during his college years to working at ICP and later Walker Die Casting, to certified exterminator with Ace Pest Control. Jim’s greatest talents were meeting people and never knowing a stranger. He had a big heart and took people for who they were on the inside. He always looked for the good in those he met and was kind, generous and witty. He could always make people laugh; he was one of a kind. He was an avid golfer, loved Vanderbilt sports, and cared deeply for his many friends and family.

Preceded in death by his mother, he is survived by his father of Columbia, Tennessee, his brother, Nathaniel Ogilvie (Gil) Murrey, Jr. of Cornersville, Tennessee, sister, Hallie (Patrick) Bensinger of Pulaski, Tennessee, “twin” cousin, Sam (Hal) Moran of Kingston Springs who was born within 30 minutes of Jim in the same hospital, and special friend, Arcie Porch of Cornersville, Tennessee. In addition to his immediate family, he leaves many very close cousins and dearly loved friends.

In lieu of flowers, donations can be made to the Marshall County Library or to a charity of your choice.

London Funeral Home is assisting the family with arrangements.