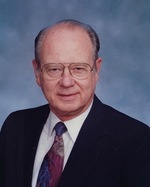 He was a native of New Orleans, Louisiana, the son of the late James Wright and Mildred Dennett Wright. He began working at Teledyne Corp. in 1967, and became General Manager/President before retirement 1993, a member of the Brentwood United Methodist Church and former member of Lewisburg First United Methodist Church. Bob was decorated with medals from the Air Force during his time of service during the Korean War.

In addition to his parents, he was preceded in death by his wife, Harriet Orcutt Wright, a sister, Beverly Johnson, and grandchild, David Alexander Harris.

Funeral services will be conducted on Friday, March 6, 2020 at 10:00 am from the Lewisburg First United Methodist Church, 325 W. Church St., Lewisburg, TN 37091 with burial to follow at 2:00 pm in the Middle Tennessee Veteran's Cemetery, Nashville, TN.

Visitation with the family will begin on Thursday, March 5, 2020 from 4:00 pm until 8:00 pm in the Chapel of London Funeral Home and will continue on Friday,March 6, 2020 from 9:00 am until the funeral hour at the Lewisburg United Methodist Church.

In lieu of flowers, donations may be made to the First United Methodist Church, 325 West Church St., Lewisburg, TN 37091.