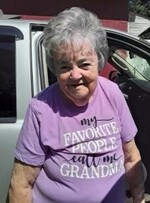 She was a native of Marshall County, the daughter of the late Edward Curtis and Nancy Curtis. She was a retired Machine Operator from Faber Castell.

Funeral Service will be conducted on Friday, April 30th, 2021 at 2:00 pm from Chapel of London Funeral Home 324 West Church Street Lewisburg, Tennessee 37091 with burial to follow in Whorley Cemetery.