To share your memory on the wall of Wanda Potter, sign in using one of the following options:

She was a native of Maury County, the daughter of the late A. C. and Elizabeth Roberts Brock. She was a homemaker and a member of the Baptist faith. ... Read More
Wanda Gail Potter, age 66, of Lewisburg, died Monday, March 9th, 2020 at NHC Oakwood.

She was a native of Maury County, the daughter of the late A. C. and Elizabeth Roberts Brock. She was a homemaker and a member of the Baptist faith.

In addition to her parents, she was preceded in death by numerous brothers and sisters.

An announcement of arrangements will be made at a later date.

To send flowers to the family or plant a tree in memory of Wanda Gail Potter (Brock), please visit our Heartfelt Sympathies Store.

There are no events scheduled. You can still show your support by sending flowers directly to the family, or planting a memorial tree in memory of Wanda Gail Potter (Brock).
Visit the Heartfelt Sympathies Store

We encourage you to share your most beloved memories of Wanda here, so that the family and other loved ones can always see it. You can upload cherished photographs, or share your favorite stories, and can even comment on those shared by others.

Thank you so much Tammy. 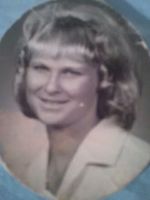